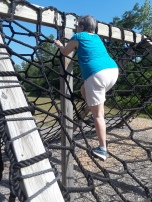 The Autobahn Park south of downtown Columbus is relatively new, but I suspect that most of my suburban neighbors have never considered it a destination. I know some have walked and biked on The Scioto Mile, which ends at the park, but it’s the mile-long walking and biking trail that draws their attention. I’ve walked it myself and have enjoyed the many points of interest along the way, swinging benches, fountains, statues, and a lookout over the river. It’s not ideal for a visually impaired walker, because many cyclists are…. Well, down right rude. They give no warning when they are speeding toward you from behind, instead of calling out “On your left,” as is common cyclist courtesy.

But today, my story is about the park, although Dan and Dora and I did walk a little on the Scioto Mile. The park is named for the building that houses a museum of sorts, all about birds in the area. We did not enter the building, because it looked like there were a lot of people there, and right now, even with masks, we wouldn’t feel safe. What we found to be the most fun was the adult playground. Well, I’m sure kids play there too, but Dan and I enjoyed the challenge of what kids do naturally, climbing over structures that were not originally meant for that purpose.

We started with the rock climbing wall. Because there was no safety equipment or climbing shoes available, I managed to get up only about a foot off the ground, long enough for Dan to get a picture. A water tower dominated the spot with at least 3 stories of winding stairs, but Dora and I declined to climb. Dan took our picture from 2 stories up, capturing the shadow of the tower behind us. Next, I had the unique experience of climbing a cargo rope, as you will see in the next photo. . I tried walking on the log, testing my balance, but there is no photo of that, because Dan was busy catching me as I fell off. I see some balance PT in my future. My last amusement was to walk through a double line of about 20 tires. You have to step in the middle of each one as if you are stepping in the middle of doughnuts, giant doughnuts. The added challenge for me was that my legs are short. Gigantic truck tires were available for flipping, to strengthen your upper body, but I passed on that one.

As we began our walk around the park, Dan’s attention was arrested by the sight of a turtle, right by the road. He took a picture of it, so it got to be in this story too. Prissy me, I wouldn’t touch it, and Dora had no interest, but it was part of our park experience after all. Aside from testing ourselves on the playground, we managed to walk almost exactly 3 miles. I thought we should add an extra mile for doing all these extra activities, especially since by the time we were back at the car, it was almost 90.

Next time, I’d like to come with a group, and have a little competition. Wouldn’t that be fun? Come to think of it, it would be fun to do anything as a group these days. Maybe next summer.