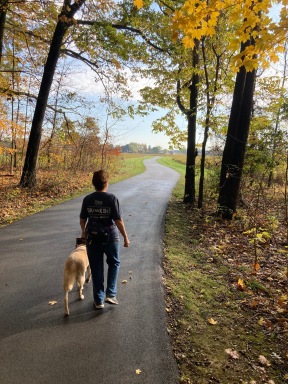 We did it! Miraculously, the weather warmed up for another mild autumn day, perfect for a walk in a park. A lot of other people had the same idea, as we encountered more walkers and cyclists today than on any other park in our quest to do all 19 Metro Parks in the central Ohio area. It seemed to be a relatively new park, judging by the youth of the trees and the condition of the paved pathways. Bird houses had been constructed near the paths, but they were not the same as the ones built for Purple Martins as in other parks. The sounds of birds and small animals were missing, as it’s the time of year for either hunkering down or flying south.

The most troublesome animals were those riding atop bicycles as they whizzed past without a word of warning. Clearly, these are not the same species I’m used to riding with who call out “On your left,” as they pass another cyclist or walker on a trail.

As usual, we stopped to read the signs about the park and the benches that memorialized a loved one.

The only significant landmark was a wind turbine that at times was stock still and other times whirling around. I foolishly asked Dan to take a picture of each position, but he said it would come out looking the same in both frames. Here’s what the internet said.

“The Wind and Solar Learning Center features a 7.5 kw wind turbine and two 1.2 kw photovoltaic solar displays that are connected to generate power to a public restroom and shelter area. The center also features an interactive learning area for park visitors whom are interested in wind and solar energy.” BTW, that grammatical error was not mine.

We must have been in a different part of the park , because the visitors center was not in our view. Still, it was a lovely way to end our journey through the Metro Park system, and we did over 3.6 miles. This is not, however, the end of our walks with Dan, as he has graciously agreed to take us out on the warmer days for walks that are truly a treat for Dora as well as for me.