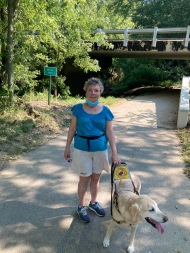 As we drove east of Groveport, I began to feel that we were out in the country, especially when the GPS took us off the main highway. The road zigged and zagged through corn and soy bean fields. It reminded me of bike rides where the scenery was described to me as “corn fields on the right and soy beans on the left.” But just as I was beginning to wonder if we were being led to the end of the world, a parking lot appeared. Dora sat up and looked around with great anticipation. She knew this was going to be the highlight of her week. Mine too. Once a week, my friend Dan takes us to a Metro Park to break up our boredom with staying home the rest of the week and to continue our quest to do all 19 Metro Parks around Columbus. Here’s how Dan describes the park.

“Walnut woods consists of three sections, The Buckeye Area to the east, the largest and center section of predominantly wetlands and meadows and the Tall Pines Area to the west. Our hike began in the Buckeye Section following the Buckeye Trail and then The Monarch Trail which runs along Walnut Creek near the north and then parallels the west boundary of the center section. The Sweetgum Trail then leads into the Tall Pines Area. On the return trip we chose to follow the Kestrel Trail which takes a more southern route through the center section back to the Buckeye Area parking lot. On this grass and dirt path Dora had the wonderful experience of doggie freedom. The harness and leash came off and we were like three kids out on a summer’s day!”

Most of the path we walked was paved, which made for a smoother and therefore faster pace, but not by much. My sacroiliac was really bothering my left leg, but I pushed through the pain, because of the peacefulness of this park. Going on a weekday is always a smart thing to do, but in this particular park on this particular day, we ran into very little traffic. We started on what is known as The Buckeye trail, but it’s not the one that goes all around the perimeter of Ohio. It took us beside the Walnut Creek, and I wondered if it was the same as The Big Walnut that runs through the town where I live.

The Monarch trail was aptly name as a beautiful Monarch butterfly chose my arm to take a ride on. I know that is supposed to be a very cool experience, but butterflies don’t belong on my arm. Neither did the cricket that decided to take a ride on my behind. Dan thought it was amusing, but I demanded that he “Get it off of me!”

One of the attractions we hadn’t expected was observing the rows and rows of carefully planted and consistently spaced trees. It was marked as a nursery.

But my favorite trail was the one that went through the meadow by a pond. Because there was absolutely nobody around, I took Dora’s harness off and let her trot along with us and not be tethered to me. At first, she didn’t know what to do with her freedom, but when I urged her to go run ahead, she caught on and had a blast, never getting more than a few yards away and always looping back to make sure it was OK. On her last trip back, she decided to walk right between Dan and me, like a little family. I too was enjoying that trail, because it was easier on my leg. This was another 4.3-mile walk. In the photo of Dora sitting on my feet with her harness off, you can tell by her big grin how much fun she was having. Have you ever seen a happier dog?