Last week when Dan, Dora, and I visited Three Creeks park, we had a nice time and a good walk, but we were scratching our heads in puzzlement. We only saw one creek. We decided we needed to go back, only this time at a different entrance to find the other 2 creeks and the confluence of them all, as advertised. 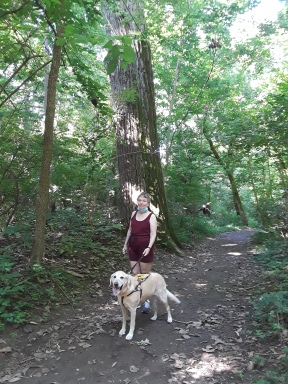 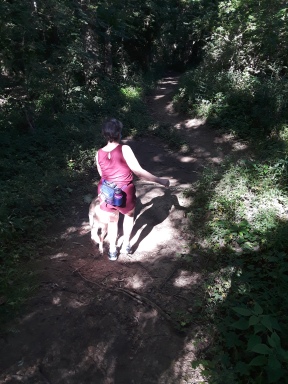 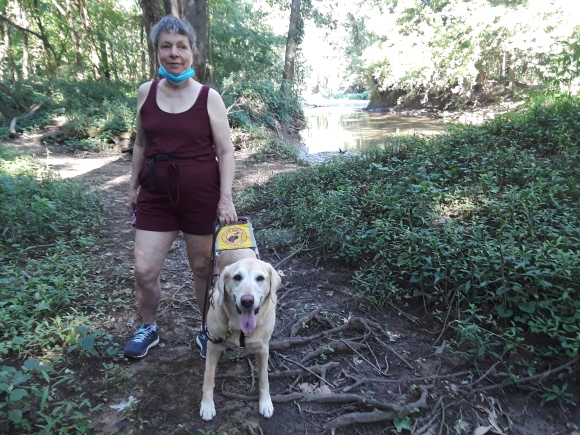 Very soon after crossing the parking lot, some friendly women directed us to the Bluebell Trail, which would take us to Blacklick Creek. To get to it, we had to hike down a steep hill with tangles of roots covered with mud. Yes, Dan could see the creek, but to get close to it, we would wish we had worn boots and used hiking sticks. Now this was hiking as I remembered it from my early Hen Hike days. But this day, I was wearing tennis shoes and shorts and only had Dan’s arm to save me from tumbling into the mud. But before I realized I needed a hand, Dan managed to get a couple of really nice pictures of the scene. Here’s what he said in his email to me with the photo attached.

“Fascinating how some pictures randomly turn out. You and Dora are walking on the Bluebell trail with shadows dominating the photo except for what appears to be a spotlight of sunshine directly on our stars!”

In another photo-email, he said, “This is a very good photo! You and Dora both have pretty smiles standing on a ground covering ofvarious sizes of tree roots with little Blacklick Creek.”

After climbing back up that shady bank and continuing on the trail, an enormous moss-covered tree caught Dan’s attention, and we had another photo op. The moss was not that velvety kind but the kind that feels like grass growing out of the bark, which was extremely thick, and protruded prominently like waves. I did touch it, but I am not a tree hugger. Posing in front of one is more my style.

This day was the most pleasant one we’ve had in weeks, so it seemed that half of Columbus had had the same idea of walking in the park. So did the cyclists. Unfortunately, they have the same rights to the trail for walkers. I say unfortunately, because most of them had no respect for the walkers. It is common practice for cyclists to call out “On your left!” when getting ready to pass a slower moving vehicle or walker. It is a courteous way of saying, stay in the right lane, because I’m about to pass you. But the cyclists on this path acted like they had never heard of that. Dan had to keep swiveling his head to look back to check for cyclists and then tell me to direct Dora more to the right. She had a tendency to like to walk down the center line instead of keeping to the right. Once, Dan had to pull me over and off the trail as an inconsiderate cyclist passed a group of people coming toward us, so he was headed right for us. He was trying to squeeze between Dora and the walkers , a certain disaster if Dan hadn’t seen what was happening and made the split second decision to pull us out of danger. I must say here that Dan never pulls or pushes me, but he was very firm, let’s say, in his suggestion to move to the right and off the trail. As Dora continued to insist on walking on the center line, and the cyclists continued to be jerks, I took Dan’s arm and just heeled Dora for the last half mile or so. I wish the people who design these trails would make completely separate ones for walkers for their safety.

We never did see the confluence. We learned later that it is indeed there, but the trees and weeds have hidden it. I was expecting a bridge or dock, but we got to see 2 out of three creeks, and we put in almost 3.8 miles. . This was number 6 and 6B. I can hardly wait for number 7.